Once released in the blood, growth hormone is very short lived. It is generally completely metabolized and gone within a half-hour. During that time, however, it manages to reach the liver and many other cells in the body, and induce them to make another polypeptide hormone called Insulin-like Growth Factor One (IGF-1). It is really IGF-1 that travels around to the various tissues of the body to affect most of the benefits that we attribute to growth hormone. The secretion of growth hormone itself is regulated by a classic biofeedback loop. This means when levels of growth hormone in the blood reach a certain threshold, growth hormone stimulates receptors in the pituitary to stop further growth hormone secretion. It also stimulates receptors in the hypothalamus to stop GHRH and turn on somatostatin. IGF- 1, which goes up in response to growth hormone, also feeds back on the pituitary and hypothalamus to help control growth hormone secretion, This is nature’s system of checks and balances to assure we don’t have too much of any one hormone.

The nomenclature for growth hormone is a bit complicated, but understanding it from the beginning can save much confusion in the future. Somatropin refers to growth hormone of the same amino acid sequence as the naturally occurring growth hormone.

Prior to the advent of recombinant DNA technology, the only source of growth hormone was from human cadavers. More than 27,000 children worldwide were treated with growth hormone of this source (pit-hGH). Due to short supply, children were treated with low doses and interrupted regimens as a result their response and ultimate height was mitigated. Distribution of pit-hGH was stopped in the United States and most of Europe in 1985, with the emergence of Creutzfeldt Jakob disease. This is a rare and fatal spongiform encephalopathy, caused by a small pathogen called a Prion. This is the same pathogen that causes “Mad Cow Disease” recently seen in Europe from infected cattle. It is impossible to catch Creutzfeldt-Jakob disease or any other infection from recombinant human growth hormone because it is not derived from a human or animal source, but from a purified tissue culture.

It wasn’t until much later that adult growth hormone deficiency was recognized to be a problem. It was discovered that adults who were deficient in growth hormone suffered from premature cardiovascular disease, reduced bone density, central obesity, decreased muscle mass, depressed mood, elevated levels of LDL (bad) cholesterol, slower wound healing, fatigue, poor exercise tolerance and poor immune function. At that point the use of growth hormone began in this unfortunate population, resulting in improvement of all of the above. It wasn’t until 1990, however, that the benefits of growth hormone and the treatment of normal aging were recognized.

Somatopause is an extrapolation of the term “menopause”. Menopause is the condition in women whereby the ovaries atrophy and cease to produce the sex hormones Estrogen, Progesterone and Testosterone. Somatopause signifies the gradual decline in growth hormone production by the adult pituitary gland in both men and women that begins at approximately age 30 and continues at a steady rate throughout life. The decline in growth hormone level that occurs with Somatopause is accompanied by deterioration in the structure and functional capacity of our body, which is ultimately devastating to the human condition. This can be interpreted as the aging process. In fact there is absolutely no difference between the clinical signs and symptoms of aging and those of adult growth hormone deficiency as described above.

The benefits of growth hormone use in Somatopause which have been clearly documented in the medical literature include the following: a decrease in body fat, an increase in muscle mass, thickening of the skin with decreased wrinkling, improvement in the cholesterol profile, an increase in bone density, enhanced feeling of well being, a decrease in The waist to hip ratio (meaning fat is removed primarily from around the waist where it is associated with a high risk of coronary disease), improvement in aerobic capacity, enhanced immune function and a decrease in the frequency of illness.

Side effects of growth hormone are generally mild and are largely associated with salt and water retention. The minority of patients that experience this typically complain of mild weight gain from water retention associated with a vague feeling of puffiness. This is sometimes accompanied by joint discomfort particularly in the fingers, with a feeling of tightness when making a fist. Other joints may also become uncomfortable.

Carpal Tunnel Syndrome is a well-known side effect of growth hormone that was more common in the early days when growth hormone was given in higher dose with lower frequency. Carpal Tunnel Syndrome is also a function of fluid retention, which causes water to accumulate in the closed carpal tunnel compartment of the wrist compressing the median nerve. This results in numbness and tingling in the palm and fingers. Abstaining from growth hormone for about a week, and then resuming the treatment with a 20% dose reduction easily remedy these side effects.

Older patients are more subject to side effects and are generally started at a low dose of growth hormone than younger adults. Another potential side effect of growth hormone is the elevation of blood sugar. Growth hormone mobilizes body fat, causing our fat cells to break Themselves down and release free fatty’ acids into the blood stream. These free fatty acids are energy molecules, which can be taken up by organs and many of our organs to be used for energy. When our muscles are consuming free fatty acids as a fuel, they are far less interested in sugar, therefore they tend to resist the effects of insulin, and extract less sugar from the blood. At the same time, growth hormone can increase glucose output from the liver to the blood. This combination of effects can raise blood sugar and raise insulin levels, neither of which is good. Fortunately, this is only a problem in people who eat a diet high in sugar and starch, and do little exercise.

Patients with Acromegaly also afforded a research group at UCLA Department of Endocrinology an opportunity to answer questions about cancer risks from use of Growth Hormone. In the November 1999 journal, Hormone Research, published by the Division of Pediatric Endocrinology, UCLA, Los Angeles, Calif., USA, they stated” Increased GH levels as seen in Acromegaly has been associated with Benign Prostatic Hyperplasia(BPH) but not with prostate, breast or lung cancers..” In fact, there are very few articles that support the notion that growth hormone cause any kind of cancer. Reports from John Hopkins research of acromegaly patients followed in from 1870s to 1950s showed decreased incidence of cancer, and these were patients with growth hormone levels 2-10 times the high normal level throughout a lifetime.

How they are feeling in terms of energy, well being, body composition, frequency of illness, their own physical appearance etc. is far more valuable a marker than any blood test can be. What we really use the IGF-1 level for is to be certain beyond a doubt that we’re not giving too much growth hormone. We titrated the dose of growth hormone to get an optimal clinical response (a happy patient) even if the IGF-1 hasn’t reached a particular goal range. This often allows us to limit the dose and minimize patient costs. After all, we’re treating the patient not the blood test.

Originally taken only from human cadavers, and used only in children of short stature, growth hormone has had an interesting and controversial history. Fortunately, the understanding of its importance in adult physiology came at approximately the same time as recombinant DNA technology, which led to greater availability along with virtual safety. Soon after this, the comparison was made between growth hormone deficient adults and aging adults. Because of the tremendous similarities, growth hormone began to be used and soon gained great popularity in the treatment of normal aging. Growth hormone is clearly useful and therapeutic in this regard as long as it is used in a carefully monitored, professionally managed program. Any growth hormone program must include proper nutrition and exercise with emphasis on a low refined carbohydrate diet.

I make the following recommendations for anyone considering a program of Comprehensive Hormone Replacement Therapy (CHRT); make sure that the Physician is a board certification from the American Academy of Anti Aging Medicine and are in good standings with their state board of medical examiners. This is the only means by which you can be assured that the physician is qualified and knowledgeable to diagnose and treat you.
Thank You, 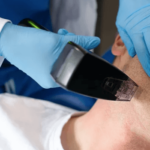